Titan is the story of this cycle, illustrating the interplay between several of its permutations; a cloud of krill, a whale, fisherman, and their environment.

Currently in development, this film will combine traditional as well as 3D animation, 2D fx/compositing and digital illustration. It is the most recent product of my ongoing musical collaboration with programmer, musician and artist Walter Harris. What began solely as an attempt to rebuild a functional musical partnership through the internet eventually yielded the process by which Titan was imagined.

Interestingly, the inability to physically play in the same space, combined with the flexibility of digital audio production strengthened our desire to compose, and much more time was spent actually discussing the ideas and emotions to be expressed that traditionally would have been developed through jam sessions in a practice space.

This process lent itself to becoming increasingly visual as well as narrative to facilitate communication. We eventually found that developing narrative structures was a key motivator in our mode of production. Narrative inspired composition is certainly not new, as many bands have often cited such inspiration for their work. What may be unique for our process in this regard is that developing visual and thematic ideas outside of a practice space was the only way to energize the creative process over such a distance.

We needed to build the stories we wanted to play.

Before long, I started doodling: 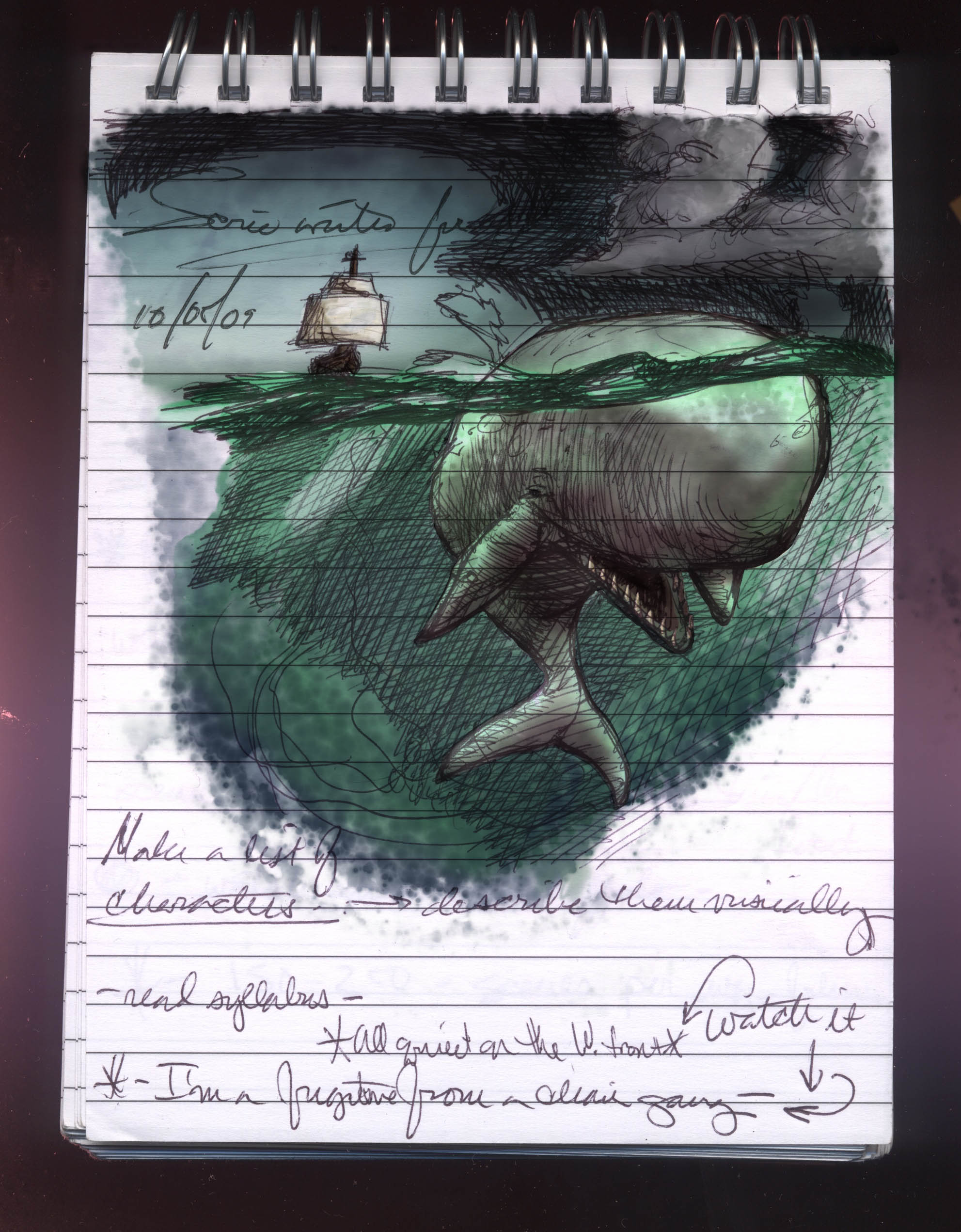 This image was the first visual result of this collaboration, acting as a style frame for the rest of the project. The storyboard was finished at the beginning of 2012 resulting in the animatic above.

Speak Health was a media blog and research compendium designed to foster meaningful public discourse about holistic health perspectives developed at the Imaging Research Center. As part of the partnership between the IRC and The Institute for Integrative Health, I helped produce a short film about an interesting study that focused on the lower rates of heart disease found within a neighborhood that had developed and maintained a strong sense of community. I modeled and animated a giant human heart that acted as the central metaphor in the film documented in the videos posted here. Learn is more about the project here.

The Bellows March was at one time a pilot initiative between UMBC visual arts faculty Eric Dyer and the Imaging Research Center. The goal was develop a production pipeline that would successfully allow Dyer and his production assistants to build animated sculptures in 3D space with the goal of physically printing them by utilizing rapid prototyping technology. I partnered directly with Dyer to develop the specific techniques and overall production design. The goal was to produce one of these kinetic sculptures or “cinetropes” as a proof of concept. The clip here showcases an excerpt from his finished film, The Bellows March, that include animation that I designed. I also developed the unique character rigging for the interesting concertina character central to the film. Additional information can be found here.

Noetic was a pilot initiative launched by the Imaging Research Center in 2007. Developed around Howard Gardener’s notion of “multiple intelligences”, users were required to function in teams towards a given solution, relying on game play mechanics designed to test and respond to the real-world strength of users. More information can be found here.

During my tenure at the Imaging Research Center, I have spent significant time devoted to the development of digital puppetry. This was initiated by a collaboration between the IRC and the political cartoonist Kevin “Kal” Kallagher in 2005 to re-envision illustrated satire for an increasingly interconnected and mobile world. A team of four, including myself as lead animator, brought Kal’s illustrations of former President Bush to life as a 3D caricature, translating his signature style by digitally scanning and animating a bust made by Kal himself. After personally working with Kal to ensure all additional shapes and expressions modeled met his personal vision, I animated the two shots below as a proof of concept. Once we were sure Kal’s sensibility could be maintained, this data set was nested within a programming environment that allowed users to control the model as a puppet through the use of flight simulator joy sticks. Bush v1.0 was debuted at the Walters Art Museum as part of the opening night celebration of a retrospective show of Kal’s work entitled Mightier Than the Sword: The Satirical Pen of Kal. Much more about the project can be found here.

Years later this same technology and process was utilized when working with the Center for Women in Information Technology @ UMBC to develop avatars for their yearly festival Computer Mania Day. I worked directly with Collette Searles of UMBC Theater, who expertise in puppetry elevated the performative aspect of our system immensely by enlisting undergraduate theater majors to perform as a developed character named Jennifer Webb. More about the project can be found here.

The Euphoria project is a fresh approach to a longstanding problem: substance abuse among teenagers. Instead of yet another short public service announcement telling people what NOT to do, it is a feature length film about how to get what everyone DOES want: happiness. And, instead of creating yet another clear and competent educational film that teenagers will sleep through, Euphoria uses dozens of improbable visual metaphors to draw people into connecting some ideas for themselves. These play against narration describing neuroscience, history and the social sciences related to happiness.